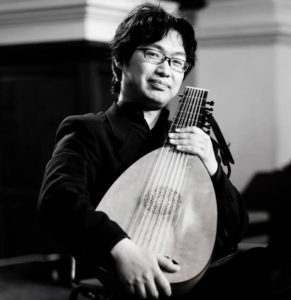 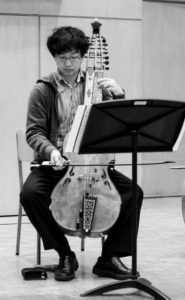 As a soloist, Ryosuke won the first prize (no second prize) and audience prize in the competition “III Consorso Maurizio Pratla” in L’Aquila (IT) in the department for Solo-Lute (July 2013) (read). He was already invited to many international festivals to have recitals, like “Rezonanzen” (January 2011), “Les journées du luth” in Paris (March 2012, held by French Lute Society), “Fest für die Laute Wien” (May 2012), “Internationales Festival der Laute” in Bremen (May 2012, held by German Lute Society) and “Young musicians’ day” (September 2013, held by English lute Society).

Beside his activities as a soloist, he is playing in various ensembles. Ryosuke is a member of the lute consort “Delight in Disorder” as well as the English broken-consort “The Queen’s Revels” as a lutenist and braccio-gamba consort “Concerto Ripiglino” as a viole player. “Ensemble Il bell’humore”, which specializes in renaissance music in 2012, won the Förderpreis Alte Musik 2015 in Saarbrücken (DE) and gave the concert and masterclass at Festival de Musique Improvisée de Lausanne 2016.

RYOSUKE SAKAMOTO was born in Nara (JP), and is living in Basel (CH). At the age of three, he first became interested in early music performance under the influence of his parents. He began to play medieval plucked instruments, later studied lute and the viola da gamba. He appeared in many concert in Japan, both as solo player and ensemble player, including the work with Bach Collegium Japan.

In 2007, the year of his graduation at Tokyo University (bachelor degree on aesthetics) he released his solo CD ‘Travels with my Lute’ (MRCD-013), recorded in Sweden, where he spent three years in his yourth. This recording got a praised commentary on the CD magazine “Gramophone”, in November 2011 (read). And second solo CD ‘Polyphony & Diminution‘ has just released in April 2016 after his Crowdfunding project.

He is a member of English Lute Society and Japanese Viola da Gamba Society.